I do know that it's been a while. So long a while, as a matter of fact, that you might have (gasp!) moved on to some more frequently updated blogging sites. But despair not, I'm back, after some busy times, and I won't leave you wondering alone for this long again (famous last words). As a matter of fact, it's been so long, that I started the blog below in the throws of our non-winter, just after the holiday season. This is what I wrote:

I do like the holiday season. Not everything about it, mind you, but many things. First, as an avid skier, I love the weather this time of the year—snow is my friend, and I don't mind the cold either (and no, I am not happy that we've not had much of either). Second, I love (most of) the decked-out houses in Baltimore neighborhoods. They range from tasteful white lights in trees to a myriad of biblical characters in various types of plastic, lit up in various colors, from Disney characters of the same make-up, to, of course, the pink flamingoes (that odd, almost quaint Baltimore tradition), all sitting peacefully one next to the other, on people's lawns.

I even like the music this time of the year. Being from Europe, a New Year doesn't start for me until I've watched the broadcast of Vienna Philharmonic's New Year's Concert, featuring many of the eternally elegant waltzes, coupled with the Lipizzaner horses, originally from the Slovenian Republic of my old country of Yugoslavia, dancing in sync with the music. Even the carols don't phase me, at least not in the first week or two of the season (though that period seems to come earlier every year, doesn't it, therefore lasting longer yet?).

This holiday season, I had an opportunity to hear an orchestra concert made up of talented students of A. Mario Loiederman Middle School in Montgomery County, that featured some of that holiday music. This is because I was given an opportunity to help them prepare (in a role of a conductor), during three visits, for a performance of Leroy Anderson's Sleigh Ride, that culminated in that concert.

Most of these kids are learning their instruments without the benefit of private lessons. A lot of them haven't even had a chance to learn how to properly hold their instrument or decipher some of the very basic note reading, let alone learn ways to mold a phrase or deliver dynamics the composer is requiring. But they make up for it in enthusiasm and youthful energy.

This is where their music teachers, in this case Ian Stuart and Liz Jankowski-Carson, enter into the equation. I have always considered the grossly underpaid music teachers in elementary and middle schools in this country to be the real heroes of our music industry. Day in and day out, they deal with kids who are playing on instruments that are sometimes missing proper reeds, strings, or are impossible to tune, kids that are sometimes lacking the capacity to be quiet, listen and concentrate at the high level that is required for any progress to occur in an ensemble rehearsal. Sometimes they have to politely ask and plead, other times turn into task masters the likes of boot camp officers, in order to get anything done. To say that rehearsing a 3 minute arrangement of the Sleigh Ride with these kids for a couple of hours is a challenge is a gross understatement.

Yet they (the teachers) perform small miracles every day. It was intriguing to see Mr. Stewart get them pepped up, yet keep them disciplined and quiet as they were preparing for their performance.

I listened to several jazz, pop and rock music-influenced holiday tunes backstage while waiting to conduct them in the Anderson, and observed the same types of communication that are necessary to pull off a performance anywhere, on any stage. Smiles and stern looks rained on them from their conductors'/teachers' faces, other sections were listened to for cues, eyes darted alternately from the music to conductor's baton, it all was there. Not all the notes were there, of course, and not every nuance came through, but it was all done with a great amount of energy and pride.

The same was true with the Sleigh Ride. I saw the whites of their eyes in crucial spots in the percussion, smiles from cellos in their fun counter-melodies, heard strong rhythm from brass and woodwinds and great dynamics from the violins and violas. The crowd, made up of very enthusiastic parents, teachers, and fellow students, exploded in appreciative applause. A great reward for the many hours of work the kids and their teachers put into the challenging program. 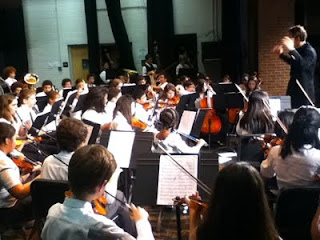 So, even though it may seem like a distant memory now, I remember with fondness the good time we all had in the last holiday season, and look forward to returning to the Loiederman School for more coachings and rehearsals in the spring, when this winter also becomes a just a distant memory. 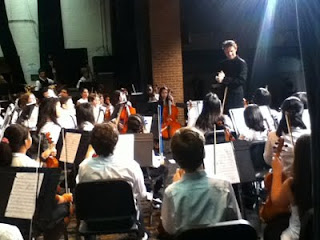 Welcome to the BSO Blog!

Read about the exciting inside world of the Baltimore Symphony Orchestra! The most recent installments are from BSO Orchestra Fellow Tami Lee Hughes. You can also check out the archives for backstage commentaries about the concert experience from the BSO’s Assistant Principal Second Violin Ivan Stefanovic and BSO violinist Gregory Mulligan.